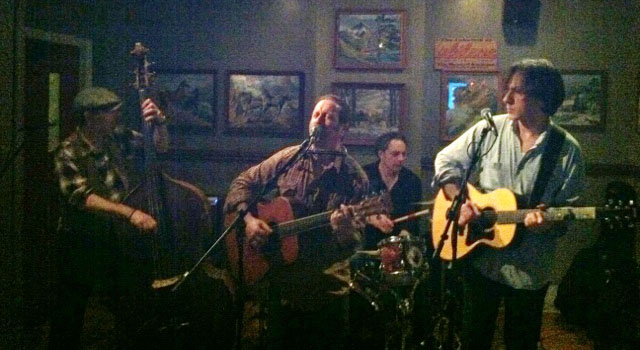 “THE THING I’VE ALWAYS FOUND SO INTOXICATING about being in that environment is the way it gives you the ability to hear yourself think and breathe” Berger said. “…freedom from authority and people telling you what to do. That’s what drew me to the place and compelled me to make this album, to try to communicate these things.” | Boston Globe

RIDE is ALBUM OF THE YEAR – “Without a doubt, the greatest discovery for us this year; if not one of the best in our entire existence…makes the writers want to write and singers sing…you can play RIDE, close your eyes and be transported to the colors of the desert, see the lonesome railroad or smell the fresh air of what is the greatest part of America…an instant American Classic.” | Nanobotrock Top Discoveries List

“It’s the breathtaking grandeur of the high desert and plateaus suspended between the pioneer days and ten minutes ago… This is country folk music wrought by a working philosopher who’s missed nothing, kept a lot inside for a time, and captured the land” | Mark S. Tucker, FAME (Folk & Acoustic Music Exchange)

“Not the glossy ‘singing cowboy’ style western music of the romanticised past, but gritty, cinematic tales of the real west…at times stripped bare, at other times dramatic and haunting…an experience like no other album I’ve heard this year.”| Alan Cackett, Editor, MAVERICK, U.K.

“Reads like a love letter to the American West…..brims with pure plucky-folk that the likes of The Civil Wars, The Lumineers, and even Norah Jones are bringing to the forefront of popular music….a sad reminder of simpler times that most modern Americans will never experience nor appreciate…..one part Springsteen and one part Dylan, but with pure charisma that is all Berger” | Jayvee, TRT! The Roundtable.com

“What I was hoping to find in the new Springsteen album and didn’t, I instead have found in this album by Marc Berger” | Space City Rock

“Guy Clark with more consistently memorable tunes. As much meditations on life itself as on plains life, the songs…never falter. No mistaking it, this is the good stuff, roots music infused with intelligence and wisdom” | Jerome Clark, Rambles.Net

“A new classic…. [RIDE] transcends modern acoustic folk…. should be held in regard with the writing of Harvest Moon…. easily one of the best albums I’ve heard″ | Greg Shaw, Nanobotrock.com

“What a f****** killer record that is!! ‘Time Waits For No Man’, an instant classic…” William Hurley, Editor, The AlternateRoot Magazine

“A fine songwriter and performer who follows his own muse, which makes listening to him a rare treat….” David Amram

“Turns the ordinary into the iconic…..an epic novel of an album that offers a haunting insight into the heart of a nation…. RIDE is the album of the Modern American West.” | Stormy Lewis, Roughstock.com

“Supremely tuneful and colorful… One can almost taste the dust and feel the desolation of the wide open prairies while listening to this exquisitely harmonic gem” | Joe Wawrzyniak, JerseyBeat

“Strives from the very first chord struck to capture the spirit the American West – and succeeds on every level…Berger takes up his acoustic guitar and joyous harmonica to bring us the incredible RIDE” | Russell Trunk, Exclusive Magazine

“Marc Berger’s RIDE is a great representation of Americana music. This outstanding CD contains the song ‘A Bottle Of Wine, A Suitcase, An Umbrella’ that has been one of our most requested songs for weeks. If you haven’t heard it, give it a listen… You’ll feel like you’ve been transported in time…” Stan Edwards, Program Director, Country Bear Radio Inc.